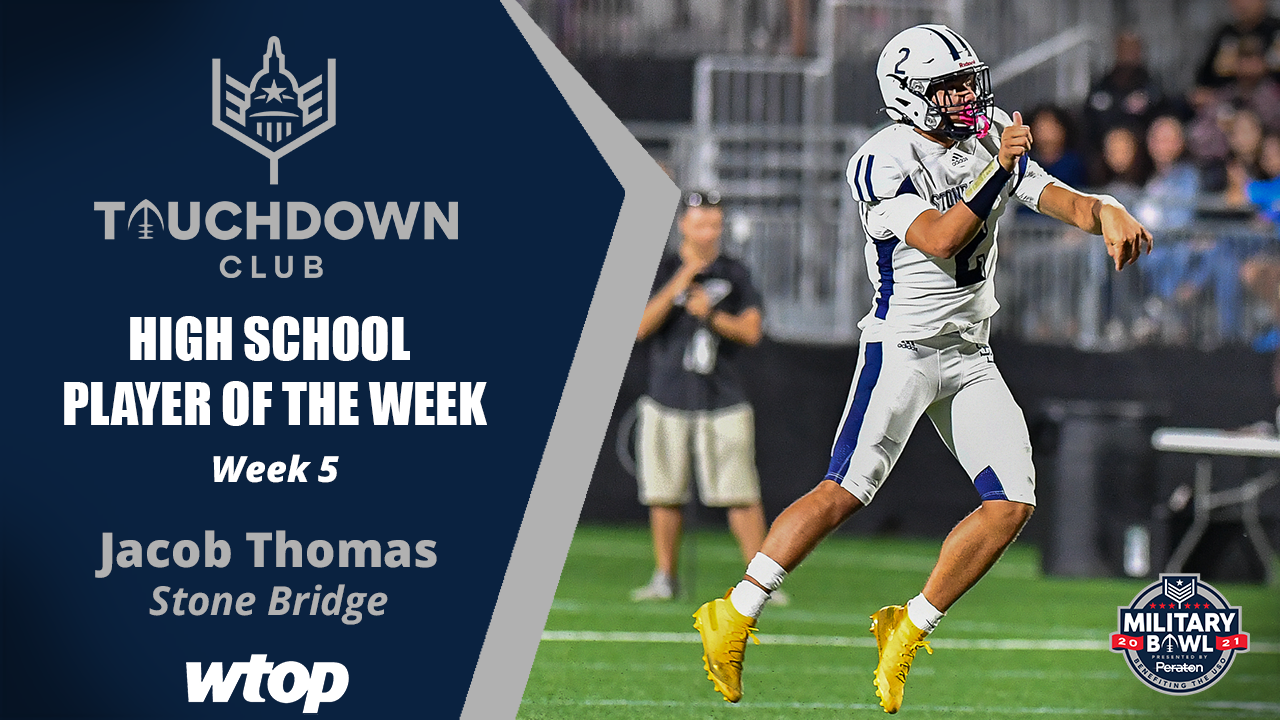 Jacob Thomas started at free safety the past two seasons for the Stone Bridge High football team. That is the position he plans to play at the University of Richmond, where he has accepted an athletic scholarship.

But Thomas also is a gifted player on offense, and now a senior, the Bulldogs need to him to be their quarterback — a position he last played on the Ashburn school’s freshman football team in 2018. Halfway through this season, though, Thomas already has shown that he can excel at that position, too.

This past Saturday night, before a soldout crowd at Segra Field, Thomas once again showed why Coach Mickey Thompson consider him one of the best to suit up for Stone Bridge. Thomas completed 10 of 13 passes for 367 yards and five touchdowns and rushed five times for 22 yards and two more scores as the Bulldogs beat rival and previously undefeated Broad Run, 64-7, in the annual Battle of the Burn. In limited time on defense, he also recovered a fumble.

“Not only does he make the plays he’s supposed to make, but he also makes a lot of ad-lib plays that other guys can’t see or make,” Thompson said. “We had a few plays that everybody thinks look great, but they just broke down and he ran around and made something happen. He can make you look great as a coach.”

For the season, Thomas has completed 47 of 65 passes for 1,051 yards and 14 touchdowns with just one interception, while rushing for 225 yards and four touchdowns, leading Stone Bridge to a 6-0 mark and continuing an amazing run.

Thomas scored 28 points in the title game as the Bulldogs’ boys basketball team won the Virginia 5A championship last winter. Then in the spring, Thomas led the Stone Bridge to a 10-0 record and another championship. He returned two interceptions for touchdowns in the state semifinals, then made the game-winning, one-handed touchdown catch in overtime of the championship game.

HOWARD
Wilde Lake DE Elijah Queen had six sacks, returned an interception 36 yards for a touchdown, forced a fumble and recovered a fumble as the Wildecats beat Centennial, 55-6.

MONTGOMERY
Damascus RB-LB-K Dillon Dunathan rushed eight times for 153 yards and three touchdowns (including a 90-yarder), returned an interception for a touchdown and forced a fumble that he recovered for a touchdown as the Swarmin’ Hornets beat Watkins Mill, 61-13. Dunathan also kicked three extra points.

PRINCE GEORGE’S
Wise QB Jayden Souray completed 15 of 20 passes for 206 yards and four touchdowns and rushed four times for 75 yards and another score as the Pumas beat Gwynn Park, 39-0.

Brentsville RB-LB Bryce Jackson rushed 12 times for 129 yards and one touchdown and on defense made nine tackles (two for losses) with two sacks as the Tigers beat Warren County, 35-0.

Sidwell Friends WR-CB Ethan Walker caught four passes for 89 yards and one touchdown and, filling in for an injured teammate, made two interceptions on defense as the Quakers beat Flint Hill, 24-10.