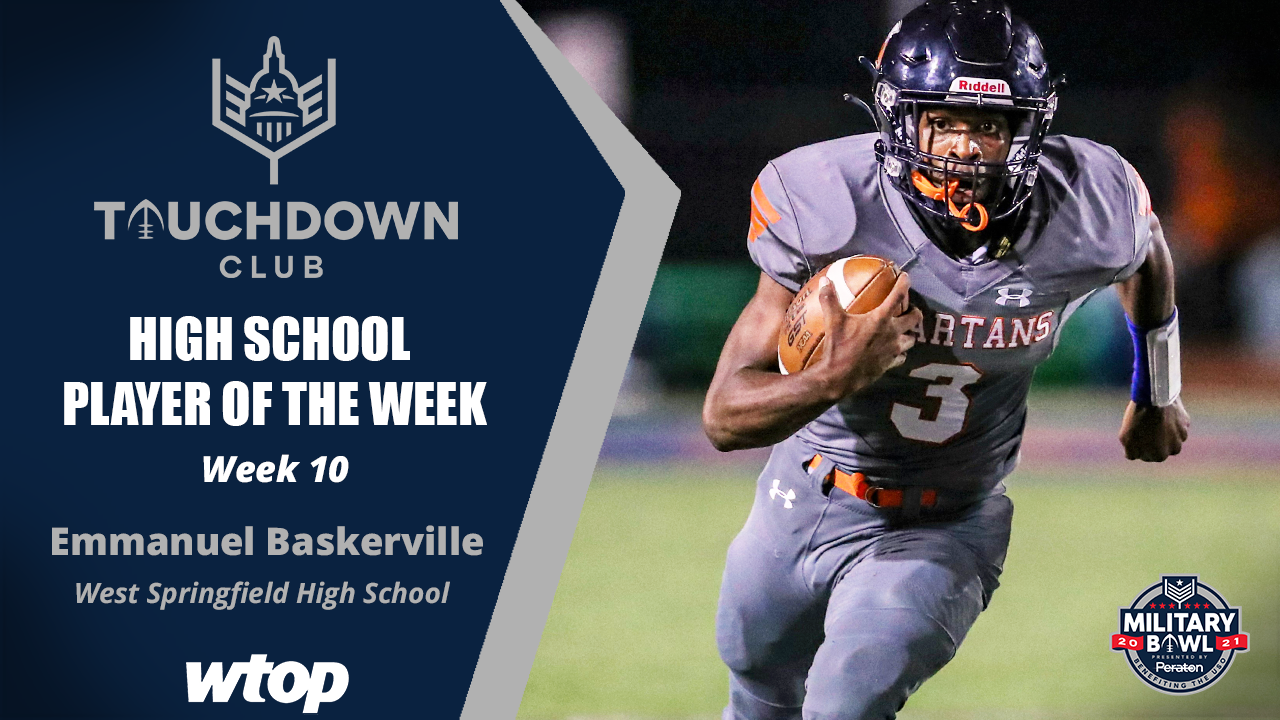 When Emmanuel Baskerville took over as the West Springfield quarterback following a teammate’s injury in the third game of the season, Coach Anthony Parker thought that his team would have to rely on Baskerville’s running ability to move the ball on offense.

Baskerville played quarterback on the school’s junior varsity last spring, but he began this fall starting at running back and free safety.

Then circumstances dictated that Baskerville play quarterback and he quickly surprised.

While Baskerville and the Spartans have been generating offense and putting up points, nothing came close to this past Friday. Baskerville completed 16 of 34 passes for 464 yards and five touchdowns and rushed 10 times for 120 yards and three touchdowns as West Springfield beat West Potomac, 59-56.

“He’s definitely surprised us,” Parker said. “He’s just been really accurate with the ball and throws a great deep ball. We have two receivers on the outside who can run and Manny can really get it out there. It’s an advantage for us.”

Baskerville’s favorite target this past Friday was wide receiver Aaron Fields, who caught eight passes for 315 yards and four touchdowns. West Springfield trailed 49-38 with eight minutes remaining before Baskerville threw 97- and 65-yard touchdown passes to Fields and added a rushing touchdown of his own.

Chesapeake RB Victor Listorti rushed 12 times for 208 yards and four touchdowns in the first half as the Cougars beat Northeast, 55-12. Listorti set a new school record with 19 rushing touchdowns this season.

H.D. Woodson RB Kevan Snead rushed 26 times for 219 yards and one touchdown as the Warriors lost to Theodore Roosevelt, 20-12.

Atholton QB Miles Scott threw touchdown passes of 36 and 27 yards late in the second quarter as the Raiders took control of the game and beat Mount Hebron, 28-19, to claim a share of the Howard County championship for the first time in 10 years.

Blair WR Jamall Worrell caught six passes for 162 yards and two touchdowns and returned a kickoff 82 yards for a touchdown as the Blazers beat Bethesda-Chevy Chase, 28-19.

Laurel RB Amare Ary rushed eight times for 249 yards and three touchdowns, caught three passes for 47 yards and a touchdown and intercepted a pass on defense as the Spartans beat DuVal, 41-10.

Patriot QB Sean Finnerty completed 13 of 18 passes for 200 yards and three touchdowns and rushed 17 times for 176 yards as the Pioneers beat John Champe, 51-25.

Leonardtown RB Tyler Weeks rushed 19 times for 145 yards and two touchdowns and made six tackles on defense as the Raiders beat Thomas Stone, 44-21.

About the Military Bowl FoundationThe Military Bowl Foundation is a 501(c)(3) nonprofit organization that operates premier events in the National Capital Region to benefit our nation’s service members. Originally formed to create the region’s first-ever college football postseason bowl game, the Foundation now not only runs the Military Bowl presented by Peraton but additionally operates the DC Touchdown Club and Patriot Point, a retreat for recovering service members, their families and caregivers on Maryland’s Eastern Shore. The Foundation hosts engaging events throughout the year to raise money and awareness for military service members, directly impacting those who give so much of themselves for the country.