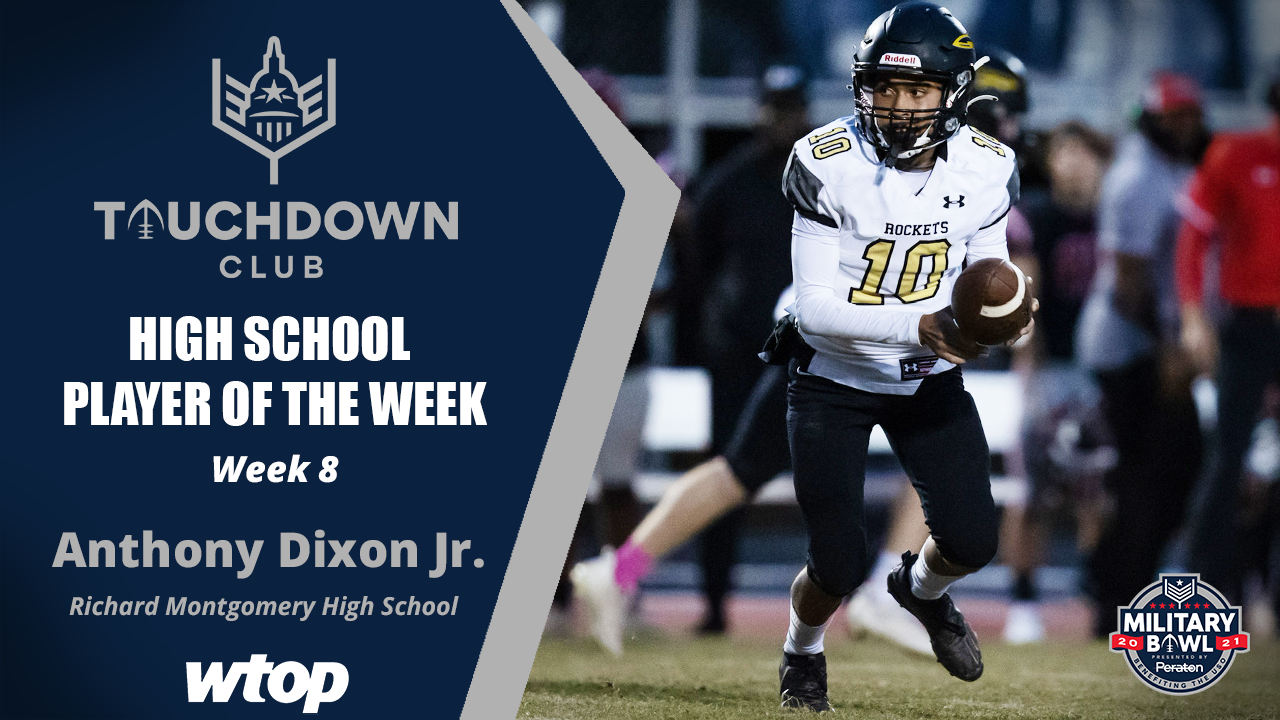 Anthony Dixon Jr. began this season as the starting quarterback for the Richard Montgomery junior varsity football team. Just a 5-foot-8, 140-pound sophomore, the hope was that the strong-armed Dixon could get experience and continue to grow physically and as a player.

But then a teammate’s injury thrust Dixon into action for the Rockets’ varsity. He made his debut against high-powered Northwest. His second start came against another top team, Quince Orchard.

Dixon, though, has not seem phased by the situation or the imposing size of some of his opponents. And this past weekend, he delivered a memorable performance that landed in the record books at one of the region’s oldest schools.

Dixon completed 20 of 31 passes for 305 yards and six touchdowns, leading Richard Montgomery to a wild 47-32 victory over Walter Johnson. For his efforts, Dixon was named the Military Bowl DC Touchdown Club High School Football Player of the Week. The Player of the Week is honored throughout each Wednesday on WTOP Radio.

“We knew he had the arm strength, he’s one of those kids where he throws the ball and makes it look easy,” Richard Montgomery Coach Randy Thompson said. “Our biggest concern with him was not really having a freshman season, playing just two games in the spring, and his ability to lead on the field, to lead in the huddle and just hold up over the course of a season at his age and size.

“We weren’t scared when he had to go in, but we weren’t 100 percent sure how he would react at the varsity level. He’s done great. He’s made smart plays. He’s surprisingly mature in terms of his game ability. He just seems to understand the flow of what it means to play quarterback.”

ANNE ARUNDEL
Broadneck QB Josh Ehrlich completed 16 of 23 passes for 248 yards and three touchdowns and rushed for 96 yards as the Bruins broke open a game that was tied at halftime and beat Severna Park, 48-14.

DC
Theodore Roosevelt RB Jaun Pratt rushed 14 times for 138 yards and two touchdowns as the Rough Riders beat Dunbar, 28-21, in a meeting of the top teams in the DCSAA Stars Division.

FREDERICK
Tuscarora WR-DB Andrew Cramer completed 7 of 10 passes for 78 yards and two touchdowns, rushed for 73 yards and one touchdown and on defense made six tackles and forced a fumble in overtime as the Titans beat Thomas Johnson, 27-21.

NORTHERN REGION
Justice RB-LB Abdullah Mohamed rushed 13 times for 71 yards and one touchdown, caught three passes for 133 yards and two touchdowns and on defense made 11 tackles and intercepted a pass as the Wolves beat Falls Church, 28-7.

PRINCE GEORGE’S
Wise QB Jayden Sauray completed 10 of 16 passes for 204 yards and two touchdowns and rushed seven times for 67 yards and one touchdown as the Pumas beat Suitland, 38-0.

SOUTHERN MARYLAND
Huntingtown K Bryce LaFollette, a Virginia Tech recruit, made a 22-yard field goal in overtime to lead the Hurricanes to a 10-7 win over previously undefeated Northern in a battle for first place in the Southern Maryland Athletic Conference.