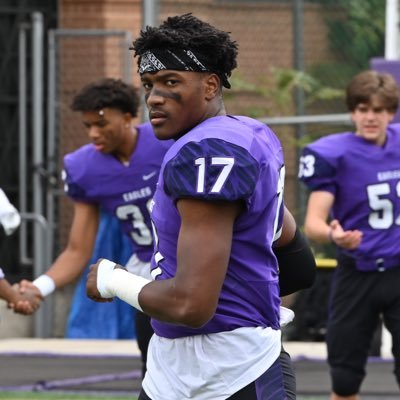 The award, which recognizes not only outstanding athletic excellence, but also high standards of academic achievement and exemplary character demonstrated on and off the field, distinguishes Jamison as the District of Columbia’s best high school football player. Now a finalist for the prestigious Gatorade National Football Player of the
Year award to be announced in May, Jamison joins an elite group of past state football award-winners, including Emmitt Smith (1986-87, Escambia High School, Fla.), Matthew Stafford (2005-06, Highland Park High School, Texas) and Christian McCaffrey (2012-13 & 2013-14, Valor Christian High School, Colo.).

The 6-foot-2, 220-pound senior linebacker recorded 44 tackles, eight tackles for loss and three sacks this past season, leading the Eagles (5-0) to an unbeaten season. Jamison also had four pass breakups and one interception for a defense that allowed just 10.6 points per game. A three-year starter, he is a two-time First Team All-Washington Catholic
Athletic Conference selection.

Jamison has volunteered locally on behalf of multiple community service initiatives with his school’s Onyx Club. “Trey Jamison is an incredible football player,” said Aaron Brady, head coach at St. Mary’s Ryken High School. “He makes plays all over the field and can definitely take over a game from a defensive perspective. It felt like he was the heart and
soul of that defense and everyone rallied around him.”

Jamison has maintained a 3.08 GPA in the classroom. He has signed a National Letter of Intent to play football at the
United States Naval Academy this fall.