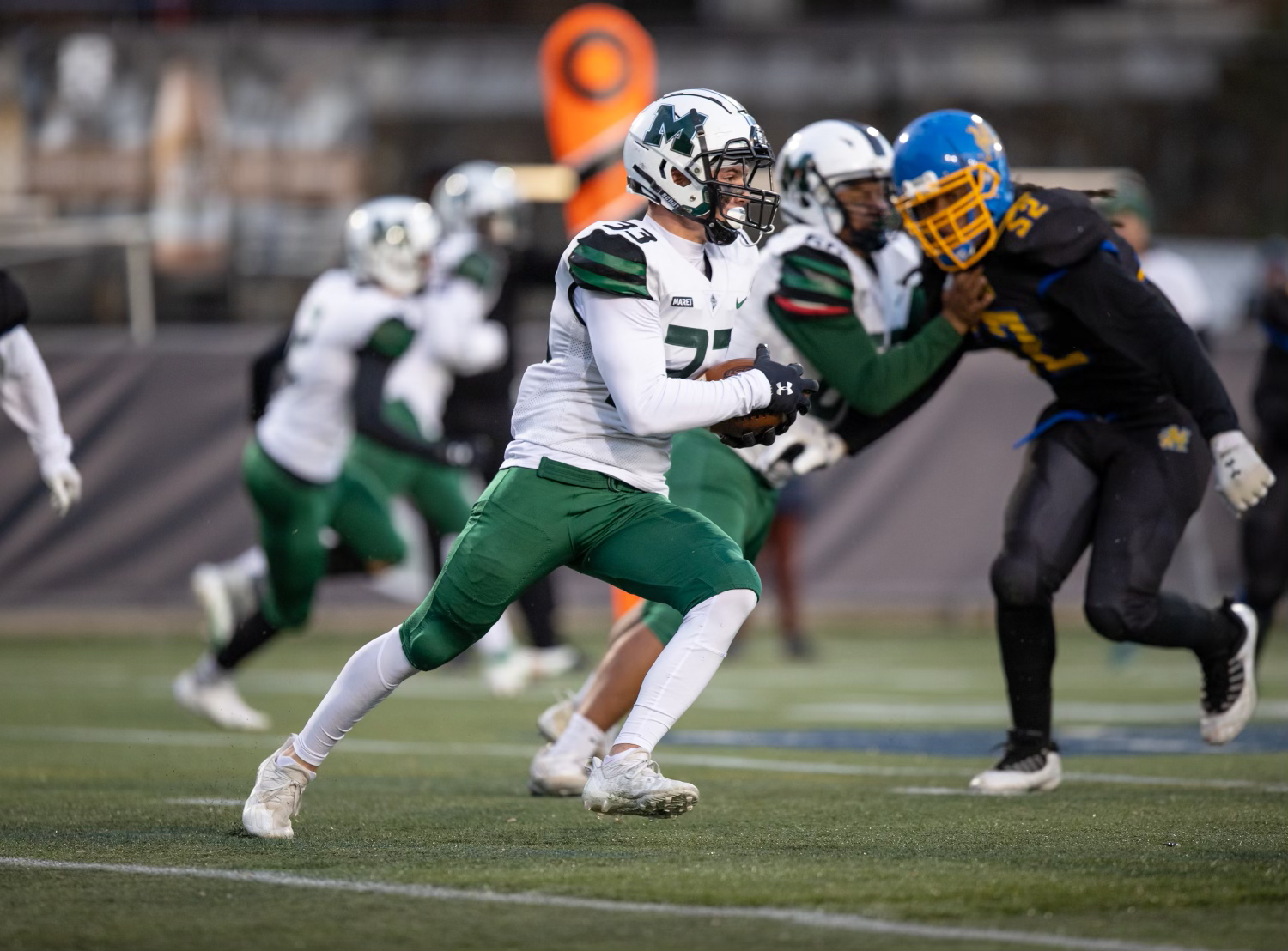 Robbie Engelberg spent this past summer trying to figure out his college path. A standout wide receiver and safety in football, the Maret School senior was being recruited by many Football Championship Subdivision programs. The starting catcher on the Northwest Washington school’s baseball team, he also was garnering interest from college recruiters in that sport.

It was after a trip that included a football visit to Army and a baseball visit to Yale that Engelberg traveled to Charlottesville to visit with the University of Virginia football coaches. The Cavaliers offered the opportunity to join the team as a preferred walk-on.

“He took it on the spot,” said Mike Engelberg, the longtime Maret football coach and Robbie’s father. “It’s his dream school. We live in Virginia. He was being recruited by everybody at the [FCS] level and was like, ‘I don’t care. I want to go to Virginia.’ He knew what he wanted and he went for it.”

Robbie Engelberg has been on the sidelines with his father since he was a toddler And while Mike Engelberg fondly recalled pictures of his oldest child on the sidelines while “always eating something,” father and son enjoyed one more special moment on the field together this past Saturday night.

Robbie Engelberg caught 11 passes for 119 yards and one touchdown and on defense made 16 tackles as Maret edged Bell, 11-8, in a thrilling DCSAA Class A championship game.

For the season, Engelberg caught 86 passes for 1,049 yards and 17 touchdowns, while making 77 tackles, forcing three fumbles and intercepting three passes.

“We kind of all thought that baseball was the path he was going to go, but being the son of a football coach pushed him the other way,” Mike Engelberg said. “It was the right decision with the year he has had. He’s going to be in good shape.”

DCTheodore Roosevelt QB Kerry Burns Jr. completed 10 of 18 passes for 185 yards and two touchdowns and ran for another score to lead the Rough Riders to a 37-22 victory over H.D. Woodson in the DCIAA Turkey Bowl.

FREDERICKLinganore RB Josh Little came off the bench and rushed 35 times for 228 yards and the game-clinching touchdown as the Lancers beat Frederick, 23-14, in a Maryland 3A semifinal.

Stone Bridge QB Jacob Thomas completed 11 of 13 passes for 239 yards and three touchdowns as the Bulldogs beat Mountain View, 37-0, in the Virginia 5A Region D final.

MONTGOMERYQuince Orchard DB Jalen Husky was matched up with Northwest’s top receiver all night and blocked the potential game-tying point-after kick as the Cougars held on for a 14-13 victory in a Maryland 4A semifinal.

PRINCE GEORGE’SWise DE Amar Thomas made 16 tackles (four for losses) and had three sacks as the Pumas beat C.H. Flowers, 28-6, in a Maryland 4A semifinal.

PRINCE WILLIAMBrentsville RB-DB Bryce Jackson rushed 12 times for 53 yards and one touchdown and caught the game-winning 49-yard touchdown pass on the game’s final play as the Tigers advanced to the state semifinals for the first time in school history with a 13-7 win over Meridian in the Virginia 3A Region B final.

SOUTHERN MARYLANDNorthern WR-DB Tyler Baskett caught six passes for 171 yards and two touchdowns, averaged 44 yards on three kickoff returns and made four tackles and intercepted a pass on defense as the Patriots beat Chesapeake, 16-13, in a Maryland 3A semifinal.

WCACCarroll RB-LB Shon Reid rushed 11 times for 127 yards and made nine tackles as the Lions beat Dunbar, 32-12, in a DCSAA Class AA semifinal.

About the Military Bowl FoundationThe Military Bowl Foundation is a 501(c)(3) nonprofit organization that operates premier events in the National Capital Region to benefit our nation’s service members. Originally formed to create the region’s first-ever college football postseason bowl game, the Foundation now not only runs the Military Bowl presented by Peraton but additionally operates the DC Touchdown Club and Patriot Point, a retreat for recovering service members, their families and caregivers on Maryland’s Eastern Shore. The Foundation hosts engaging events throughout the year to raise money and awareness for military service members, directly impacting those who give so much of themselves for the country.