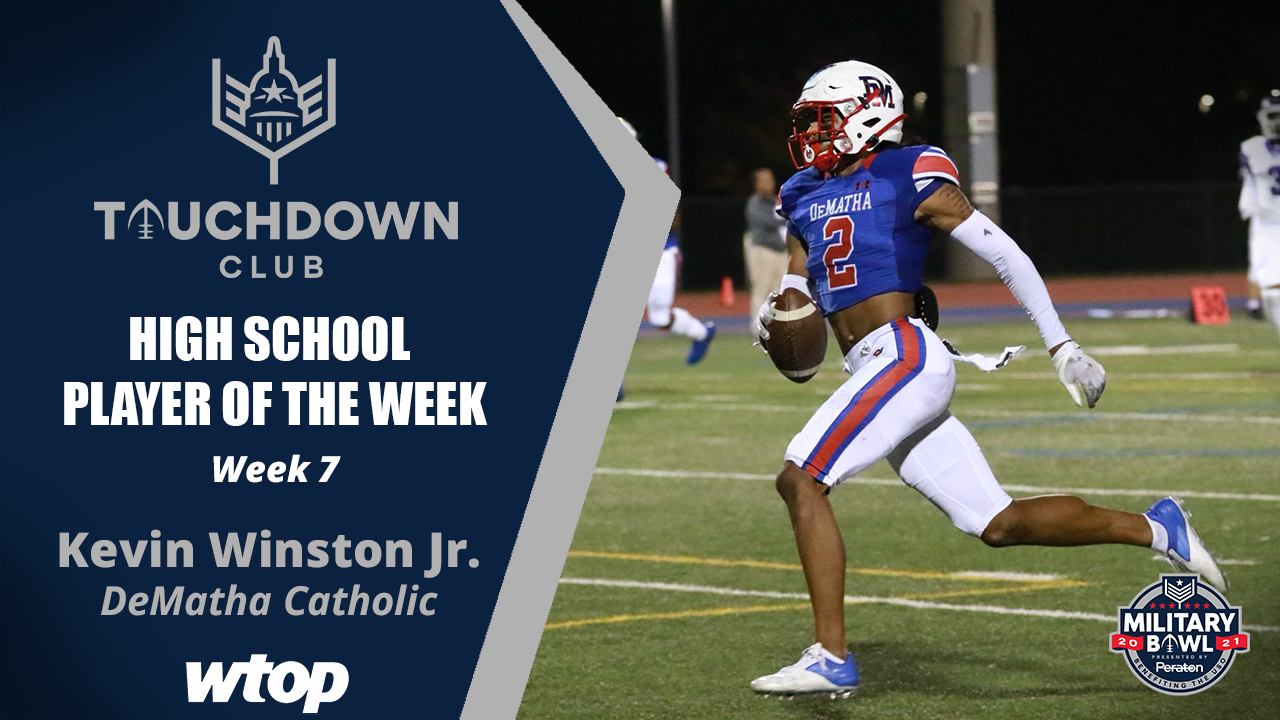 The DeMatha Catholic football team has a deep and talented roster, affording Coach Bill McGregor the luxury of using players exclusively on one side of the ball. Senior Kevin Winston Jr., however, is just too talented to play solely on offense or defense.

So Winston, who has accepted a scholarship offer to play football at Penn State, starts at wide receiver and at safety for DeMatha. He also plays on special teams. And in this past weekend’s 30-6 victory over Gonzaga, Winston showed once again that he excels in all three phases of the game.

Winston caught four passes for 101 yards, including a 45-yard touchdown. He made 11 tackles on defense. He also delivered the biggest plays in the game’s key sequence, after Gonzaga blocked a punt for a touchdown, cutting DeMatha’s lead to 10-6 in the third quarter.

Winston came off the edge to block the point-after kick. He then returned the ensuing kickoff 78 yards, setting up a touchdown and firmly swinging the momentum back to the Stags as they improved to 5-1 and stayed on track for a showdown against St. John’s on October 22. For his efforts, Winston was named the Military Bowl DC Touchdown Club High School Football Player of the Week. The Player of the Week is honored throughout each Wednesday on WTOP Radio.

“He’s so valuable for us and done so much for us, we can’t take him off the field,” McGregor said. “He literally took the game over and changed the whole outcome of the ballgame.”

DC
Richard Wright QB Stephon Fuller completed 18 of 22 passes for 360 yards and four touchdowns and rushed for 25 yards and another score as the Spartans beat Cesar Chavez, 38-0.

NORTHERN REGION
Fairfax RB-LB Tony Rojas rushed 27 times for 227 yards and three touchdowns, caught two passes for 50 yards and a touchdown and on defense made three tackles as the Lions beat West Potomac, 34-14.

SOUTHERN MARYLAND
McDonough TE-MLB Makai Young made 16 tackles, had 1 ½ sacks, forced one fumble and recovered two fumbles, returning one 35 yards for a touchdown as the Rams beat Thomas Stone, 19-13, for their first win of the season.