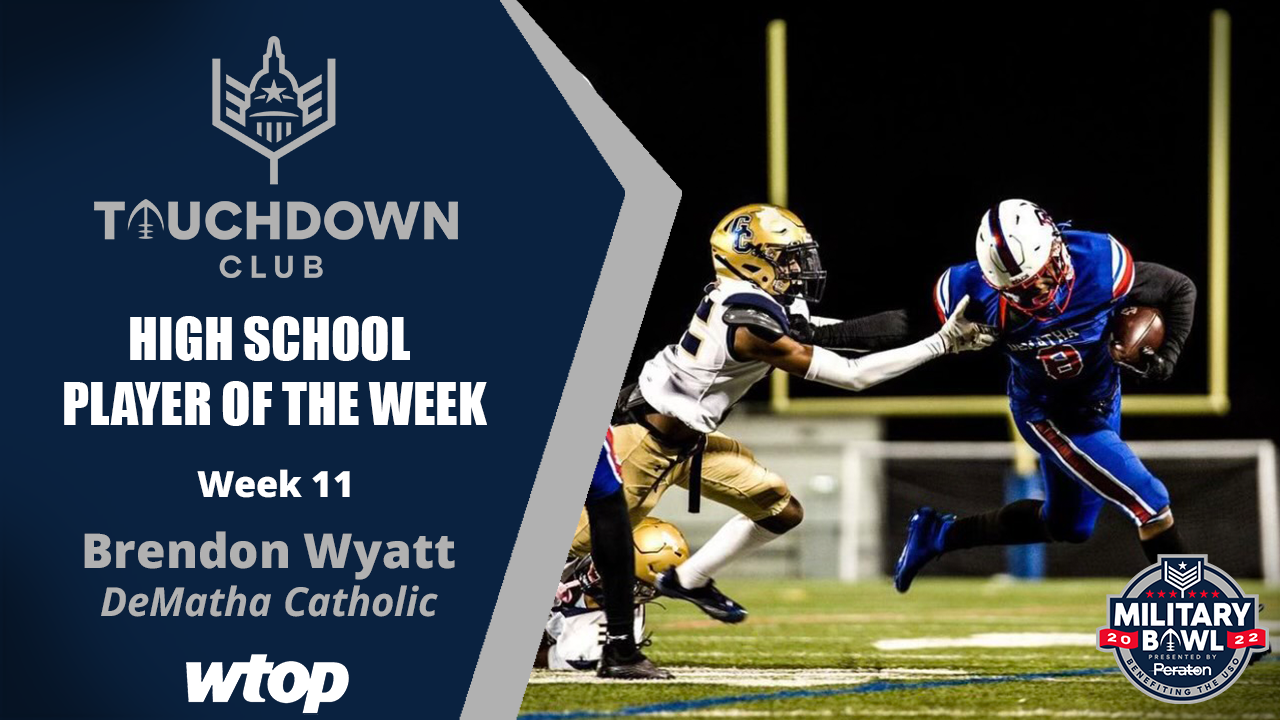 As he has racked up the yards and the touchdowns in his two seasons starting at running back for the DeMatha Catholic football team, Brendon Wyatt rarely has conveyed his feelings. Stags Coach Bill McGregor, though, has never worried about the senior standout’s passion or motivation.

“He just goes about his business and doesn’t say two words,” McGregor said. “But when it’s time to put on the pads, that quietness goes away and it’s all business. This past Friday, I don’t think he could have done any more.”

Indeed, Wyatt delivered perhaps his best performance in one of the biggest regular season games in the Washington area this fall. He rushed 17 times for a career-high 217 yards and three touchdowns, including a 80-yard score on the first play from scrimmage in the second half, as DeMatha beat Good Counsel, 28-14, in a game that decided first place in the regular season in the Washington Catholic Athletic Conference.
For his efforts, Wyatt was named the Military Bowl DC Touchdown Club High School Football Player of the Week.
“He’s been here all four years and is just easy going and does whatever he is supposed to do,” McGregor said. “He’s a great competitor.”
Wyatt was named all-conference last year as he rushed for more than 1,500 yards. He has maintained a similar pace this season, even though he often has sat out the fourth quarter as the Stags blew out many of their opponents. Entering the playoffs, he has rushed 108 times for 924 yards and seven touchdowns.
DeMatha (9-1) hosts Gonzaga in a WCAC semifinal on Friday at 7.
This week’s DC Touchdown Club Player of the Week High School Football Player of the Week Honor Roll:
ANNE ARUNDELOld Mill RB Max Jones rushed 24 times for 253 yards and six touchdowns as the Patriots beat Annapolis, 57-22, in a Maryland 4A East Region first-round game.DCFriendship Collegiate DL Bryce Jenkins made five tackles with two tackles for loss and one sack and returned a fumble for a touchdown as the Knights beat Riverdale Baptist, 28-20.FREDERICKBrunswick WR-DB Isaac Herbert caught a 24-yard touchdown pass, scored on a 15-yard reverse and intercepted two passes as the Railroaders beat Catoctin, 21-14, in a Maryland 1A North Region first-round game.HOWARDLong Reach WR Jaylen Etheridge set up one touchdown with an 85-yard kickoff return and caught a 65-yard touchdown pass as the Lightning beat Crofton, 22-8, in a Maryland 3A East Region first-round game.LOUDOUNLightridge QB Carter Working completed 20 of 29 passes for 365 yards and four touchdowns and rushed for another score as the Bolts beat Rock Ridge, 35-34.MONTGOMERYGaithersburg RB Gideon Ituka rushed 29 times for 193 yards and five touchdowns and caught two passes for 53 yards as the Trojans beat Walter Johnson, 44-24, in a Maryland 4A West Region first-round game.NORTHERN REGIONFairfax RB-LB Tony Rojas, a Penn State recruit, rushed 21 times for 218 yards and three touchdowns as the Lions beat West Springfield, 55-30.PRINCE GEORGE’SEleanor Roosevelt DT Ethan Walker made 11 tackles and had two sacks as the Raiders beat Bowie, 15-6, in a Maryland 4A South Region first-round game.PRINCE WILLIAMGainesville WR Aidan McClafferty caught 11 passes for 141 yards and four touchdowns as the Cardinals beat Osbourn, 33-32 in overtime.PRIVATEMaret QB Roman Jensen completed 28 of 41 passes for 561 yards and six touchdowns and rushed for 65 yards and one touchdown as the Frogs beat Flint Hill, 47-46.SOUTHERN MARYLANDLeonardtown RB-LB Matthew Berry rushed 14 times for 147 yards and one touchdown and made five tackles on defense as the Raiders beat South River, 28-9, in a Maryland 4A/3A East Region first-round game for the first postseason victory in school history.