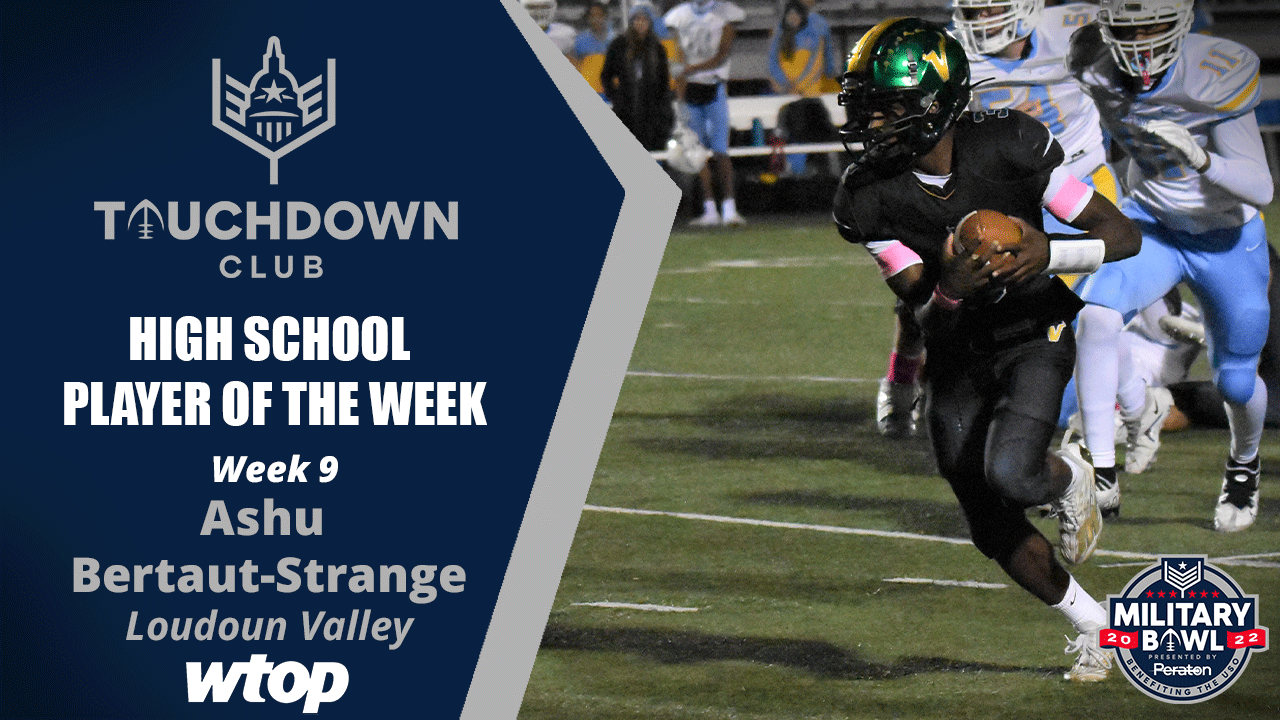 Ashu Bertaut-Strange joined the Loudoun Valley varsity football team during his freshman year and spent the next three seasons etching his place in the Purcellville school’s record books as a wide receiver. But for Bertaut-Strange’s senior season, Vikings Coach David Bishop decided to take a radical approach to try to maximize the player’s impact on every game.

“Last year we had a wildcat package for him, but we never used it in a game,” Bishop said. “After the year, I had an epiphany and wanted to get the ball in his hands more. Well, how can we make that happen? Put him at quarterback and the ball is in his hands every play.”

With his legs and his arm, Bertaut-Strange has delivered throughout the season. This past Friday, he completed 8 of 14 passes for 133 yards and one touchdown, rushed 14 times for 142 yards and three touchdowns and on defense made eight tackles and broke up two passes as the Vikings beat Lightridge, 35-34 in double overtime.

For his efforts, Bertaut-Strange was named the Military Bowl DC Touchdown Club High School Football Player of the Week.

“Week in and week out, he’s making highlight-reel type plays,” Bishop said. “He has totally embraced it. He loved the idea of playing quarterback.”

As soon as the idea was hatched, Bishop said, Bertaut-Strange started working on his passing ability, repeatedly taking receivers out to a field and throwing to them. The dedication has paid off. For the season, he has completed 75 of 124 passes for 975 yards and eight touchdowns, while rushing for 833 yards and 11 touchdowns, leading the Vikings to a 6-3 record entering their November 4 regular season finale against Woodgrove.
Bertaut-Strange also has returned a kickoff for a touchdown, returned a punt for a touchdown and caught a touchdown pass this season.
“He’s just different, just a special kid on the football field,” Bishop said. “And I’m even more proud of him off the field and where he has come from his freshman year and the maturity level he has. All the kids respond to him.”
This week’s DC Touchdown Club Player of the Week High School Football Player of the Week Honor Roll:
ANNE ARUNDELNorth County QB Darius Burley completed 10 of 19 passes for 172 yards and two touchdowns and rushed 20 times for 137 yards and four touchdowns as the Knights beat Annapolis, 49-34.
DCDunbar QB Jibril Scott passed for 378 yards and six touchdowns as the Crimson Tide beat Jackson-Reed, 46-0.
FREDERICKFrederick RB Taejon Anderson rushed 23 times for 91 yards and three touchdowns as the unbeaten Cadets beat Oakdale, 35-14.
HOWARDLong Reach QB Brice Koontz completed 12 of 19 passes for 221 yards and one touchdown and rushed for another score as the Lightning beat Glenelg, 25-8.
MONTGOMERYBlake RB Jeremiah Seaton rushed 37 times for 250 yards and three touchdowns as the Bengals beat Einstein, 28-18.
NORTHERN REGIONFairfax QB-S Jake Worthen completed 12 of 17 passes for 120 yards and one touchdown (including two completions on fake punts) and on defense made one tackle for loss and intercepted a pass as the undefeated Lions beat previously undefeated Lake Braddock, 29-14.
PRINCE GEORGE’SWise RB Christian Rawlings rushed 17 times for 209 yards and two touchdowns as the Pumas beat Parkdale, 35-0.
PRINCE WILLIAMWoodbridge QB Ethan Horne completed 18 of 33 passes for 204 yards and three touchdowns, including the game-tying score with seven seconds left in regulation and the game-winning score in overtime, as the Vikings beat Colgan, 27-21.
PRIVATEMaret QB Roman Jensen Jr. completed 26 of 29 passes for 278 yards and five touchdowns and rushed 14 times for 112 yards and two more scores as the Frogs beat Sidwell Friends, 51-7.
SOUTHERN MARYLANDNorth Point RB Kaleb Hart rushed for three touchdowns as the Eagles beat previously unbeaten Northern, 31-3, snapping the Patriots’ 13-game winning streak.
WCACCarroll TE-DE Nyckoles Harbor caught five passes for 251 yards and three touchdowns and on defense had two tackles for loss, batted down a pass and blocked a punt as the Lions beat O’Connell, 54-0.
About the Military Bowl FoundationThe Military Bowl Foundation is a 501(c)(3) nonprofit organization that operates premier events in the National Capital Region to benefit our nation’s service members. Originally formed to create the region’s first-ever college football postseason bowl game, the Foundation now not only runs the Military Bowl presented by Peraton but additionally operates the DC Touchdown Club and Patriot Point, a retreat for recovering service members, their families and caregivers on Maryland’s Eastern Shore. The Foundation hosts engaging events throughout the year to raise money and awareness for military service members, directly impacting those who give so much of themselves for the country.
About the DC Touchdown ClubThe DC Touchdown Club honors the best in Washington Metro football, with year-round events highlighted by an annual awards dinner. Operated by the Military Bowl Foundation, the Club promotes the game of football, hosts entertaining social events and generates a significant philanthropic impact for Patriot Point. To learn more about the DC Touchdown Club, visit dctouchdownclub.com or follow DC Touchdown Club on Twitter and Instagram @DCTouchdownClub and like DC Touchdown Club on Facebook.