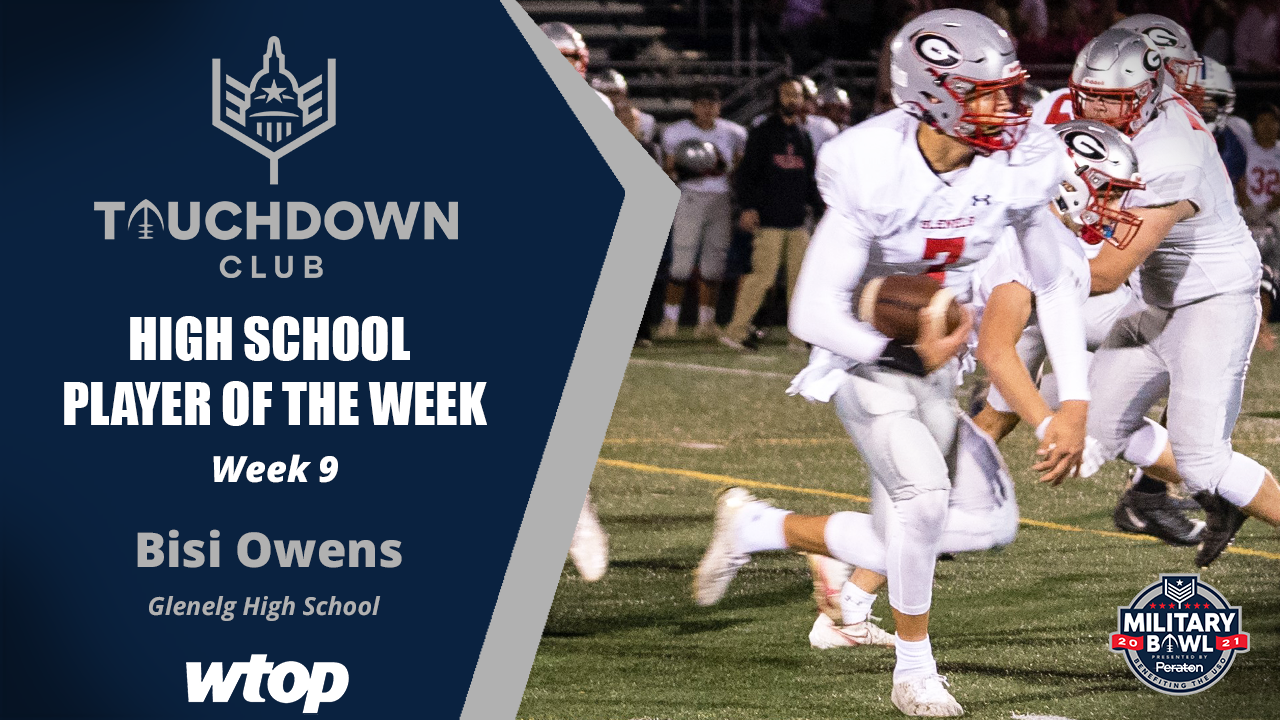 Glenelg quarterback Bisi Owens had another performance for the ages this past Friday. He rushed for 338 yards and five touchdowns and completed all three of his passes for 95 yards and another score as the Gladiators beat Marriotts Ridge, 56-24.

And yet, Glenelg Coach Tim Cullen said, the three-sport standout – Owens also plays basketball and is a state champion triple jumper — makes even more of an impact on the defensive side of the ball.

“He’s pretty much our offense, as good as he is,” Cullen said. “I know it sounds crazy, especially when you look at his stats, but he’s even better on defense. He’s a game-changer at free safety.”

The Owens brothers have carried Glenelg to many victories on the football field in recent years. Bisi’s older brother, Wande, was a standout running back and the second-leading rusher in Maryland high school history, leading the Gladiators to the Maryland 2A championship game in 2018. He now plays cornerback at Yale University.

Bisi Owens has led Glenelg to a 7-1 mark entering this week’s regular season finale against Reservoir. He has rushed for 1,238 yards and 23 touchdowns, passed for 635 yards and eight touchdowns and on defense has made eight tackles for loss and intercepted two passes, returning one for a touchdown.

“They are high IQ players and big competitors,” Cullen said. “Anything you ask them to do, they can do it.”

Loudoun Valley WR Carl Bertaut-Strange caught five passes for 100 yards and one touchdown, returned a kickoff 68 yards for a touchdown and had five punt returns for 62 yards as the Vikings beat Lightridge, 38-13.

MONTGOMERY
Rockville WR-S Okeyo Akungo rushed seven times for 185 yards and three touchdowns, caught five passes for 85 yards and one touchdown and on defense made three tackles (one for loss) as the Rams beat Northwood, 42-0.

NORTHERN REGION
Centreville RB Isaiah Ragland rushed 25 times for 326 yards and scored three of his four touchdowns in the fourth quarter as the Wildcats broke open a tied game and beat South Lakes, 27-13.

PRIVATE
Maret WR-S Robbie Engelberg caught six passes for 76 yards, rushed for a touchdown and on defense made nine tackles, recovered a fumble and made the game-clinching interception as the Frogs beat previously undefeated Sidwell Friends, 22-14.

SOUTHERN MARYLAND
Patuxent RB-LB Cameron Bott rushed for 53 yards and one touchdown and on defense made eight tackles, had three sacks and forced a fumble as the Panthers beat McDonough, 46-20.